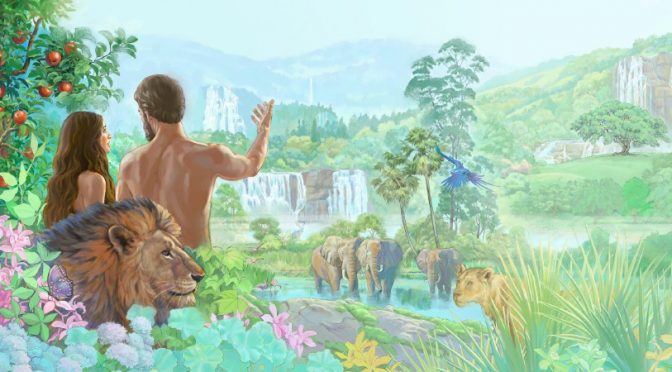 In Literature we saw the poem «Evening in Paradise» by John Milton. This poem is an extract from his narrative epic poem Paradise Lost. The following is a slide-share with the analysis made in class.

Evening in paradise de Pato_Ch
TASK 1:
The first part of the poem which is from line 1 to 12 shows an analogy between evening & paradise because the evening is portrayed as  the part of the day when one finally rest after being active all day, it is a moment of peace, silence, relax. «Silence accompanied», «Silence was now pleased», «To their grassy couch, to their nest». And paradise, as well, is a place/moment where/when one can rest, be in peace, be relaxed after an active life.
TASK 2:
The poem shows semantic fields of day/night. Words such as «Twilight gray», «wakeful», «light», «night», «evening», «morning», «day», «sleep» belong. It also has a semantic field of nature related words such as «beast», «bird», «flowery arbours», «nightingale», «moon»… Finally there is a semantic field of jewels. «Saphirs», «Hesperus», «brightest», «majesty».
TASK 3:
An oxymoron in line 5 says «…the wakeful nightingale…». The words wake and night are put very closely together. To make the reader understand that the night was so peaceful that only the nightingales (birds of the night) were awake.
There is a metaphor on line 7/8 that says «…Now glowed the firmament // With living  Saphires; Hesperus…» The jewels are used as a metaphor for the stars in order to make the night look like paradise. This is part of the night/paradise analogy.
Then in line 9/10 the moon is personified. «…till the Moon, // Rising in clouded majesty, at length // Apparent queen, unveiled her peerless light…» This is to give an impact on how majestic it was.
TASK 4:
The first part of the poem could be describing a funeral scene since it tackles silence (which could represent the mourning for the dead person) «silence accompanied», «silence was now pleased»; and the creatures going to rest could also represent the mourning of the universe towards this dead person «…for beast and bird, // They to their grassy couch, these to their nests…» but they could also serve as a metaphor for death: creatures go to rest for the night, and this person goes to rest for ever. But not the second part since it tackles more the differences between day and night, life and death. Not only death/rest/night.
TASK 5:
Is already done in the slide-share.